I have some exciting news for parents today!  You may need to sit down for this one folks …

Not that I want to age you (Ha!), it may look that way but the truth of it is life is in constant change.  I think it’s amazing how quickly some things do change!  Take; for example, technology that is in perpetual change.  Buy a computer today and you’ll see that in 6 months (approximately) it becomes obsolete.  You have to keep up with the changes or you’ll be left behind.

In my opinion, Netflix has revolutionized how we watch “TV” … that’s just it, you don’t even need a TV anymore!  The younger generation isn’t sitting in front of a TV.  Our youth is watching on their iPads, laptops, smartphones, and any other gadget they might have.  The tube might just become extinct in my lifetime.

Netflix has done it again!

If you’re my age; or older, you might remember those books that you are control over the outcome of the story you’re enjoying?  Well, Netflix has thrust innovation into full gear! Netflix  has placed control back into the viewers hands … just in time for summer.

Today, Interactive Storytelling on Netflix launches, allowing children to be in complete creative control of what their characters end up doing and saying by giving them the ability to choose from multiple paths for their favourite characters to play out on-screen. With so many endings and choice points, kids will be able to watch the same title over and over, without hearing or seeing the same exact story – a gift of constant discovery for them, and reprieve for mom and dad!

Netflix is the first to offer something like this on a global scale with three brand new titles, starting with Puss in Book: Trapped in an Epic Tale, which will be globally available on iOS and TV devices today, and followed by Buddy Thunderstruck: The Maybe Pile, and Stretch Armstrong: The Breakout later this year.

You sink into the sofa and fire up Netflix. You settle in to watch everyone’s favorite swashbuckling feline Puss in Boots. You chuckle as Puss in Boots finds himself in the story of Goldilocks with the Three Bears staring at him.
And then… you’re asked to make a choice:
Should these bears be friends or foes?
It’s actually your choice to make. Your adventure! You decide how the story proceeds and what Puss in Boots does next. 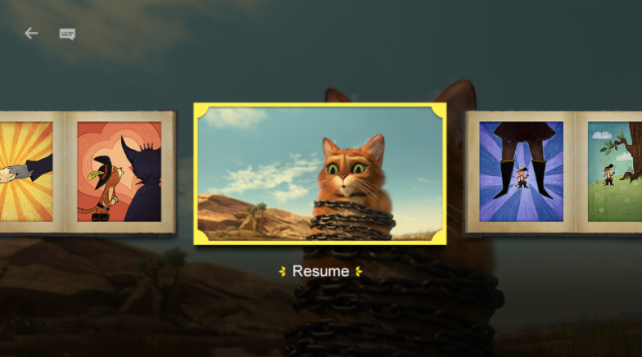 Kids are eager to “play” with their favorite characters and are already inclined to tap, touch and swipe at screens.  They also talk to their screens, as though the characters can hear them. Now, that conversation can be two-way.

Intrigued?  I suggest getting ready some snacks and drinks so that you and your kids can discover this ‘new world’ together.