Brianne and Kim are joining the  P&G Thank You Mom program!  On June 3rd, I was fortunate enough to have been invited to meet Brianne and Kim and to witness their cooking demonstration …

Disclosure: I am a P&Gmom/mamanP&G. As part of my affiliation with this group I receive products and special access to P&G events and opportunities. The opinions on this blog are my own.

Off the track and into the kitchen – Canadian Olympian Brianne Theisen-Eaton cooks up an athlete-powered lunch with her mom, Kim and P&G

Fresh from her first major competition of the year, Canadian Olympian Brianne Theisen-Eaton will meet with media on Wednesday, June 3 to share her recipe for success – literally.

The track and field star will be joined by her mom, Kim, as they host a lunch and cooking demonstration to kick off their participation in P&G’s Thank You Mom program. This program celebrates the role moms play in raising Olympians and great kids. Brianne will showcase how to cook healthy meals and snacks fit for an athlete, with recipes passed down from her mom.

Brianne and Kim are a natural fit for the P&G Thank You Mom campaign as they rely on many P&G products everyday including personal favourites such as Tide, Bounty, Gillette and Pantene.  As part of the company’s ongoing commitment to support athletes and salute their moms, all Athletics Canada athletes competing at the upcoming Pan Am and Parapan Am Games in Toronto will be receiving P&G product packages. 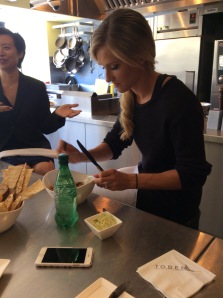 Brianne continues to make her mark as one of Canada’s top track and field athletes. She competed in the London 2012 games and holds the Canadian record for heptathlon. She is a silver medallist from the 2013 World Championships and a pentathlon silver medallist from the 2014 World Indoor Championships. She is the first and only Canadian woman to podium in the multi-events at the World Championships. But in addition to sport, Brianne is also an avid home cook, a tradition passed down from her mom.

Brianne and Kim are joining the Thank You Mom program just before she competes at the Pan Am Games in Toronto this summer as she continues to make her push for Rio.

I really enjoyed Brianne’s granola bars; they’re so simple to make and pack the protein punch she needs.  She was gracious to share her recipe …

Mix all dry ingredients together in a bowl until well combined. In separate bowl, mix almond butter, honey, and vanilla together until smooth. Sometimes I heat slightly in the microwave to make it a little more runny and easier to mix. Combine with dry ingredients (using your hands to mix is easiest). Dump mixture onto parchment lined cookie sheet and press down firmly until about 1/2 inch thick. Smooth the top.

It was an absolute delight meeting both Brianne, and her mom Kim.

P&G will be donating the following products to all Athletics Canada athletes at Pan Am and Para Pan Am Games: